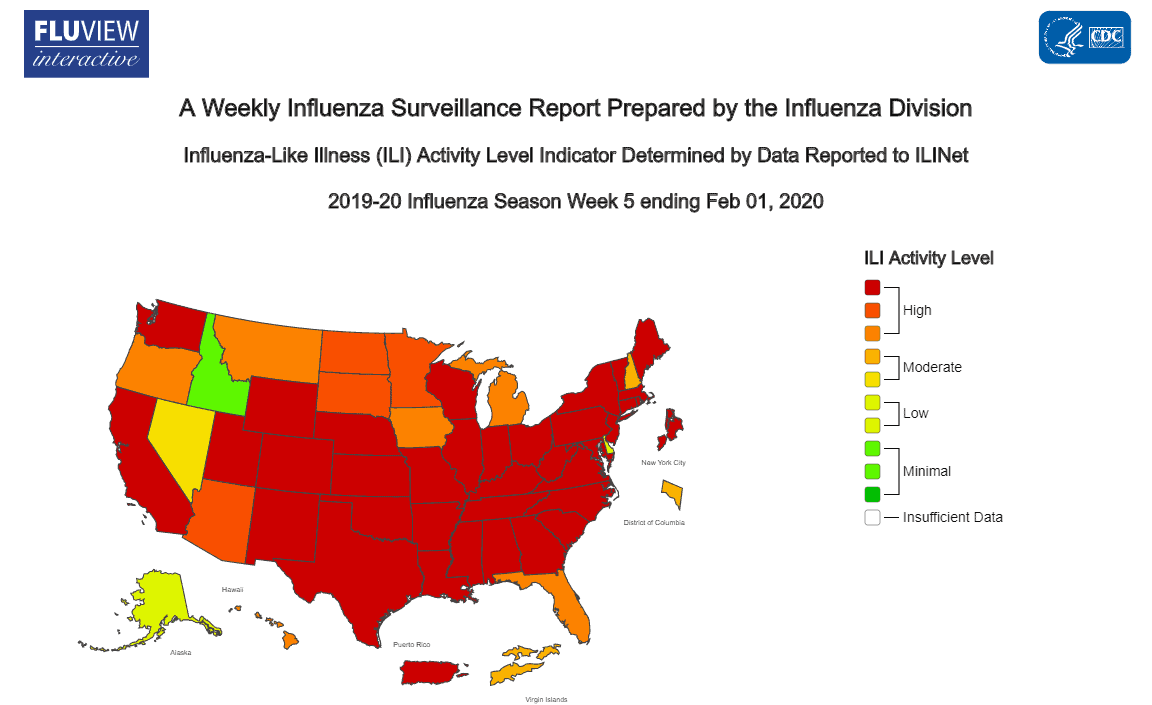 This is a guest post from Gergory Gahm, MD. It contains his opinion as a clinician and is not necessarily reflective of the views of CAFP or its membership. If any of our members would like to continue this conversation, be in touch and we’ll host the conversation.

We are buried in Influenza and almost certainly will be for three to six more weeks at minimum.

The major outbreak hitting across the country is now identified as A:H3N2. This is the third strain to hit the population in epidemic numbers this year, but it will hit older patients the hardest out of the three strains we have seen. The other two influenza strains we saw a lot this season, B and A:H1N1, tend to hit younger folks harder but are generally in decline (though I know of a significant second peak of Influenza B at a local college campus this week).

The CDC estimates that there have been at least 22 million flu illnesses so far this year in the US alone, with 210,000 hospitalizations and more than 12,000 deaths so far – and we are just now starting to see A:H3N2, which is the hardest one on older folks and kills the most people each year. In other words, as bad as it has been, it is about to get much worse. As a comparison, the WHO recently reported that a little over 600 deaths worldwide are attributable to 2019-nCoV (the novel Coronavirus), yet influenza has not sparked nearly the same level of concern.

Let me first repeat the two wisest pieces of advice I can give you:

In Colorado, more than 40 facilities have had Influenza outbreaks in the past month and that number could double (or more) in the coming month. What to do when you have an outbreak is a complex question without a single best answer. The CDC would have you immediately prophylax everyone in the facility (including staff) with Tamiflu as well as get surgical masks on everyone.

Tamiflu is a tough question. As someone who has long been concerned about Antibiotic Stewardship, I see this enormous overuse of Tamiflu as the perfect recipe for rendering it resistant and useless that much quicker. On the other hand, if widespread use in a facility could actually prevent even a handful of cases, some of which might end in death, perhaps the short-term gains outweigh the long-term risk of resistance (though then, of course, we would have nothing to offer anyone at risk). My personal bias has been to quickly prophylax everyone with close contact to cases, expanding to hallways, wings, floors or entire facilities if and when the virus spreads, but I will not argue against wider use if you feel so compelled to do so. I would estimate that about half of facilities do not end up providing more than limited prophylaxis, with the other half eventually providing widespread prophylaxis.

Masks are a different story and one that I find a bit silly. We know from good research done on other coronaviruses like SARS, that surgical masks are not very effective at curbing the spread of viruses. On a case-by-case basis, a patient initially presenting with influenza with any sort of productive cough may benefit from having a mask for a day or two, but the hallmark of influenza is a nonproductive cough, so even this would be left to question whether or not there is any efficacy. Again, do what you feel obligated to do, but do not expect clinical benefits from anything short of an N95 mask.

Gregory Gahm, MD is a geriatrician on the clinical faculty for CU Med Center who serves as Medical Director for many long-term care facilities in the Denver area and has been studying influenza for about 30 years.

My membership to the Colorado Academy serves as a means of staying connected with fellow Family Physicians who are equally committed to the delivery, survival, and improvement of medical care in our state.

The CAFP has identified 49 candidates running for the State Legislature who are or will be champions of family medicine's values, our members, and their patients in Colorado once elected. Find more voting resources here: buff.ly/3LCITAC #coleg #copolitics 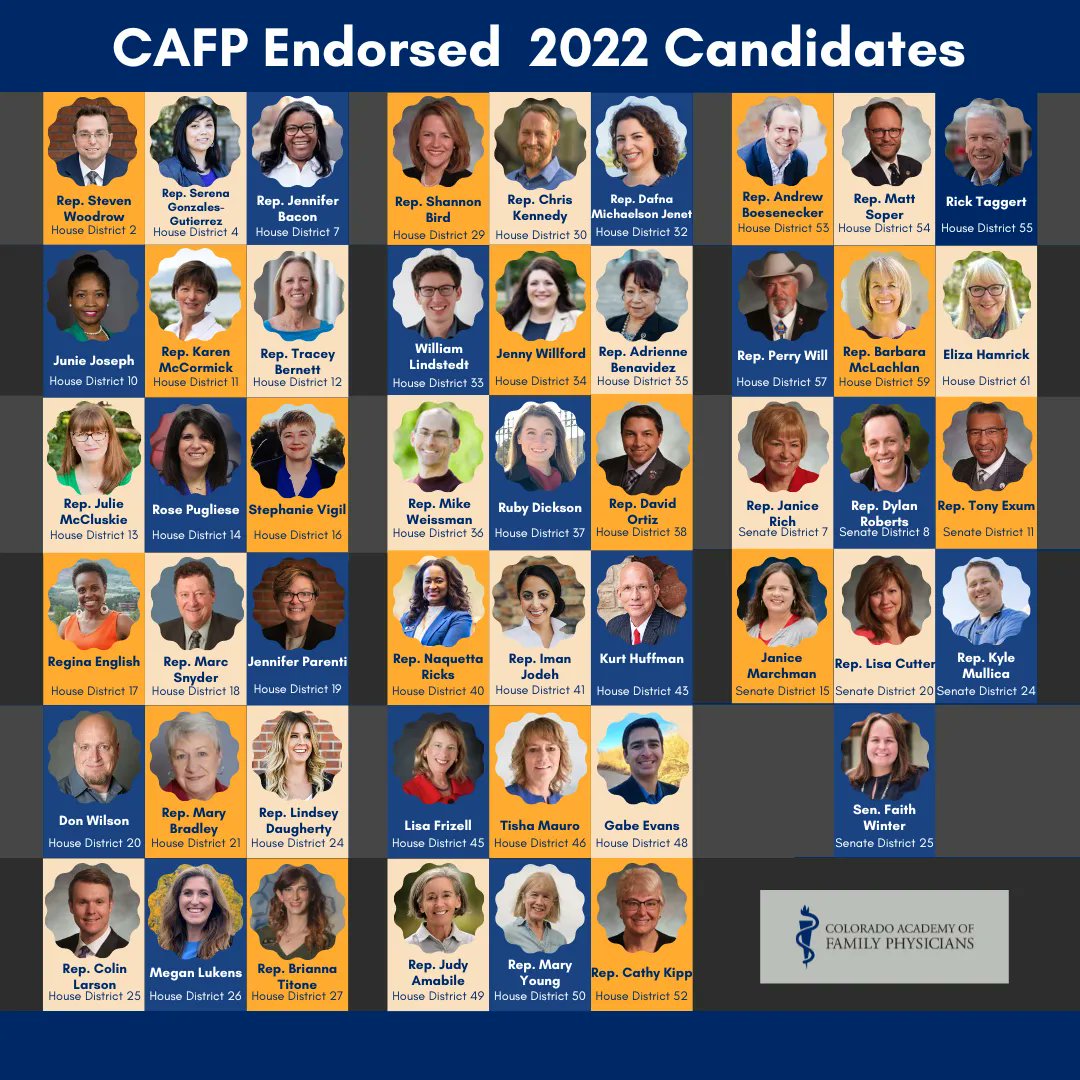 Our CAFP Delegation to the @AAFP Congress of Delegates debated 39 resolutions on AAFP policy from last year's virtual Congress & dozens of 2023 resolutions - tackling a wide range of issues from administrative burden to reproductive health, to climate change, & healthcare reform. 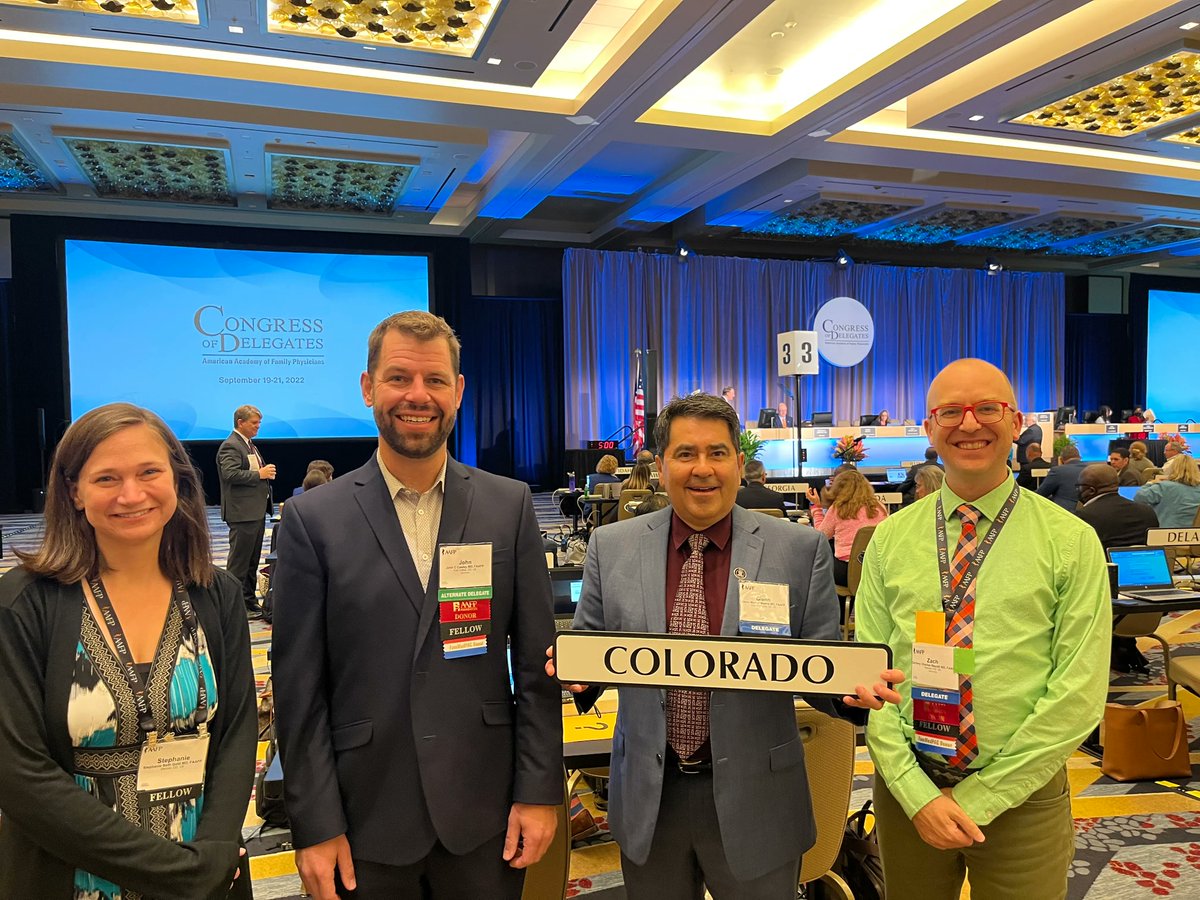 There are a lot of difficult decisions that #parents make about the care of their children. Family physicians can help build the confidence in decisions around routine childhood #vaccinations using this helpful tool to answer frequently asked questions: buff.ly/3CuxW1u 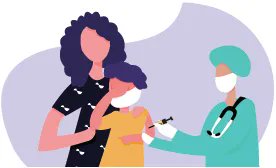 Supporting your pediatric patients and their families understand #vaccine information is an important role for family physicians. Here is a helpful flyer for you to share with your patients: buff.ly/3cgcCSO 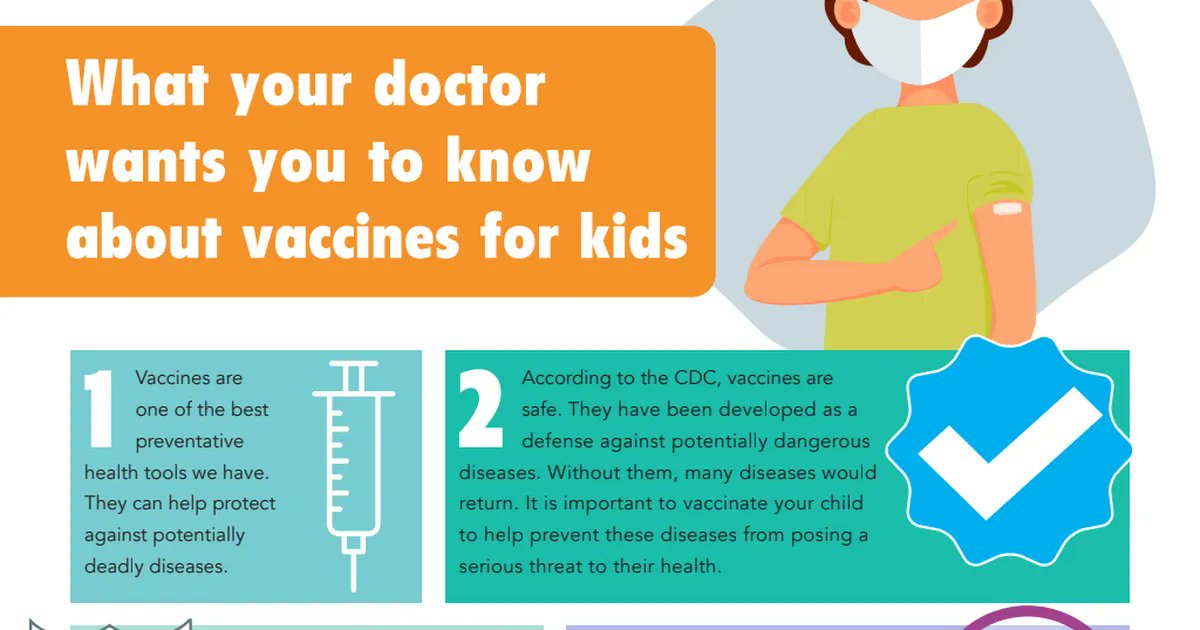 Are your adult patients asking about their routine #vaccinations? Using "anticipatory guidance" is a proactive counseling technique to help prepare to hold conversations with patients and improve the overall quality of care. buff.ly/3CusMmu 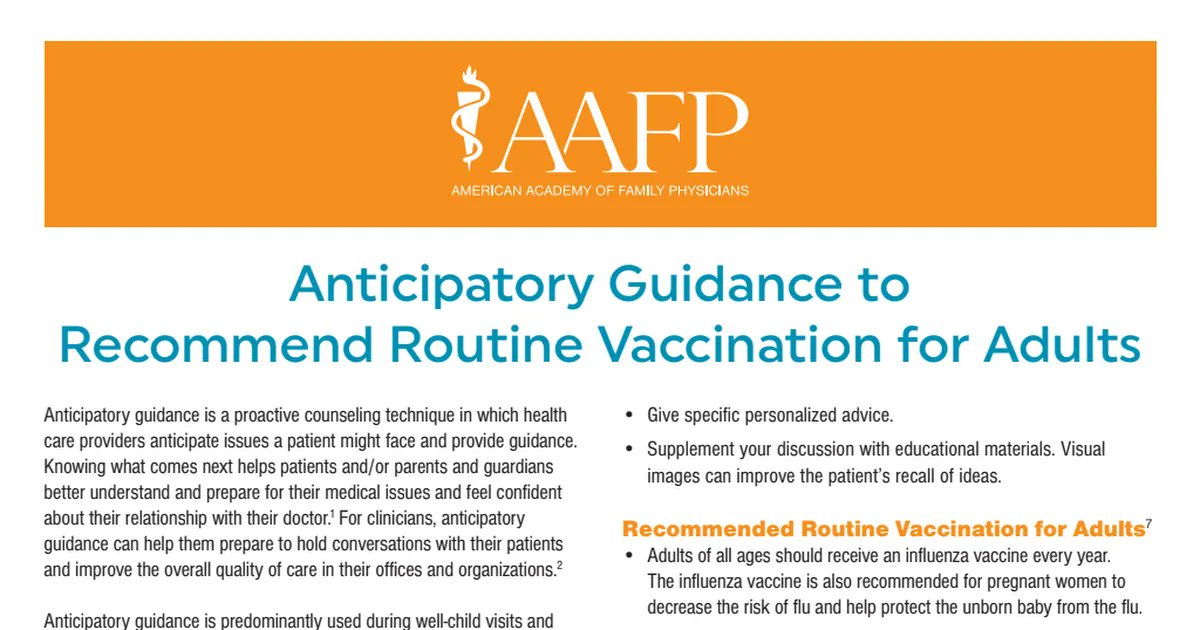 Conversations with parents about routine childhood vaccinations can be tough. Here are some helpful tips to answer their questions. buff.ly/3QPX1IC 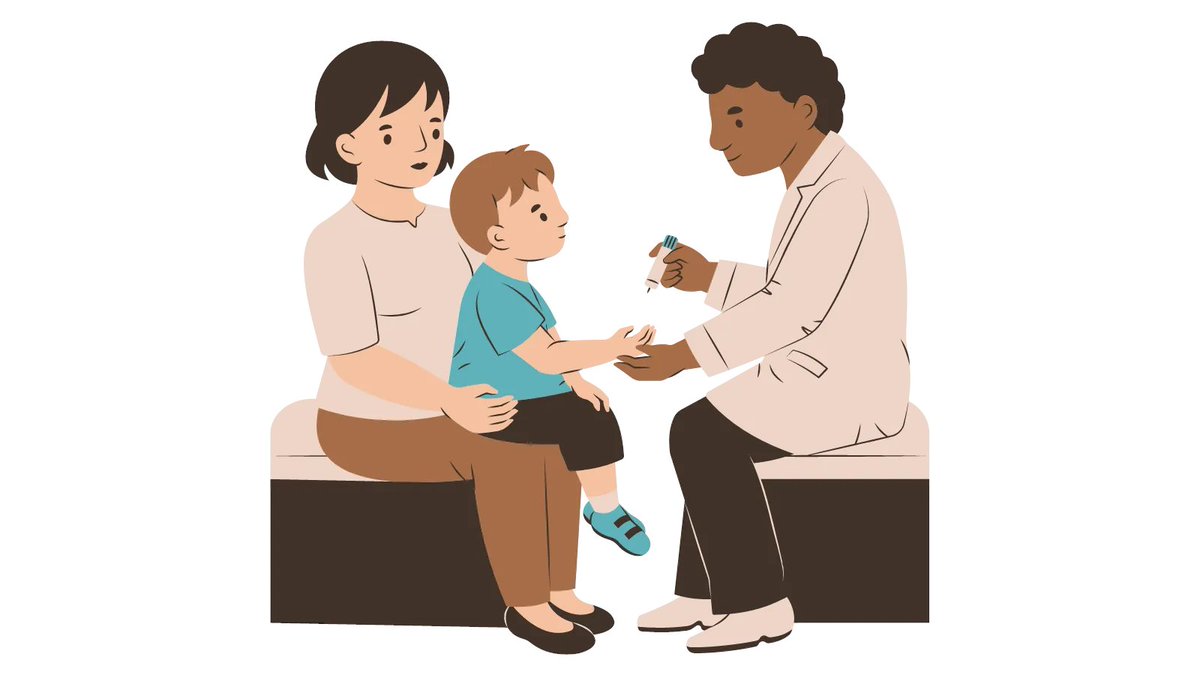 Looking for printouts for your #pediatric patients and their families on #vaccinations? Check out this "What your doctor wants you to know about vaccines for kids" flyer. buff.ly/3cgcCSO #iVax2Protect #NIAM 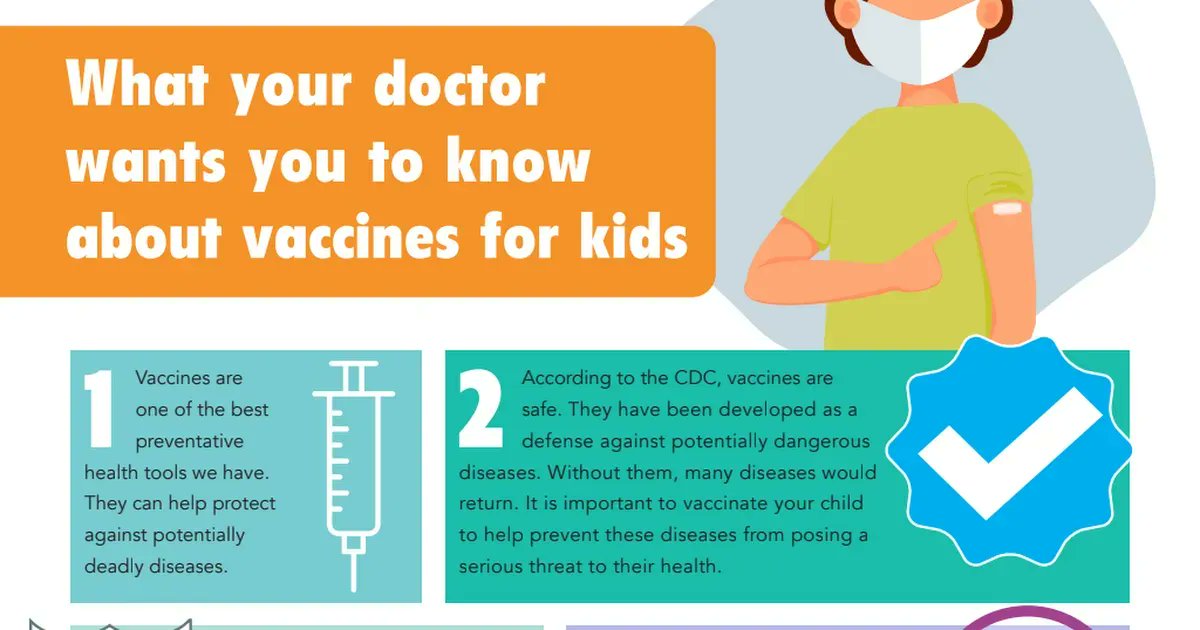 In celebration of National Immunization Awareness Month, the @aafp created a vaccine safety system fact sheet to help prepare for conversations with patients who have questions about how vaccines are made. buff.ly/3QNmAdz 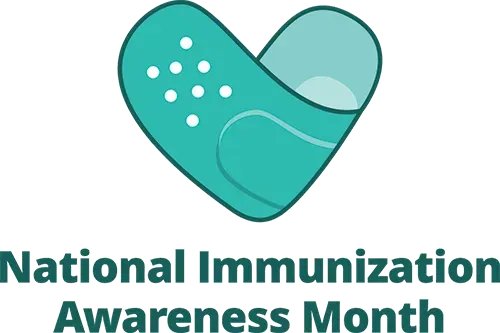 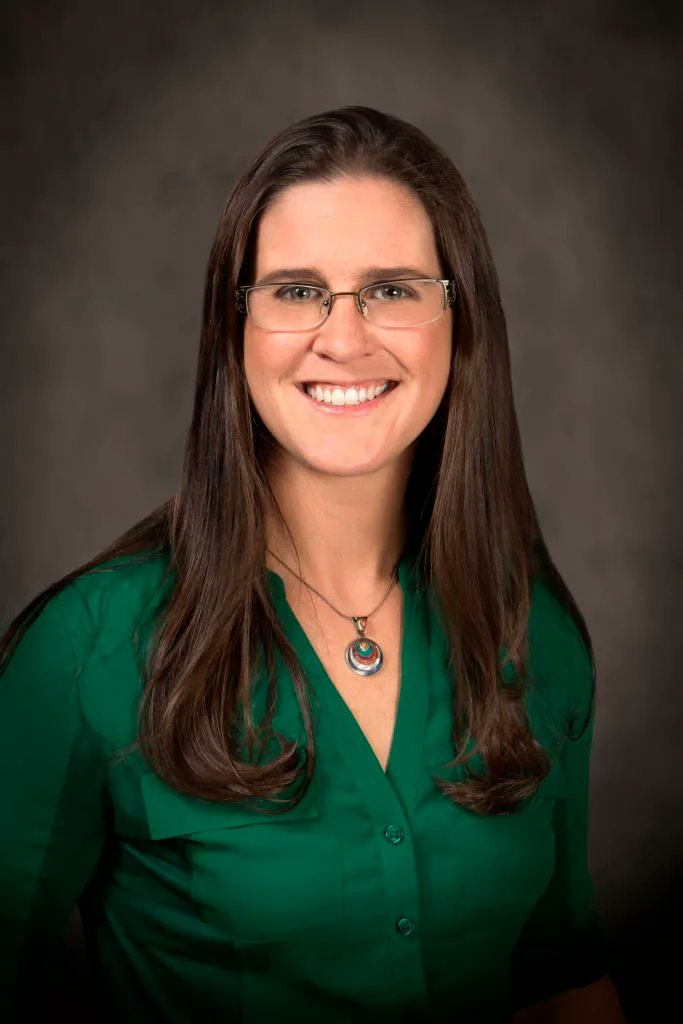 Congratulations to the @cufamilymed Interest Group for winning the @aafp Program of Excellence Award for New Initiatives for their Humans of Family Medicine instagram page, which focuses on highlighting current family medicine physicians and their stories. #familymedicine 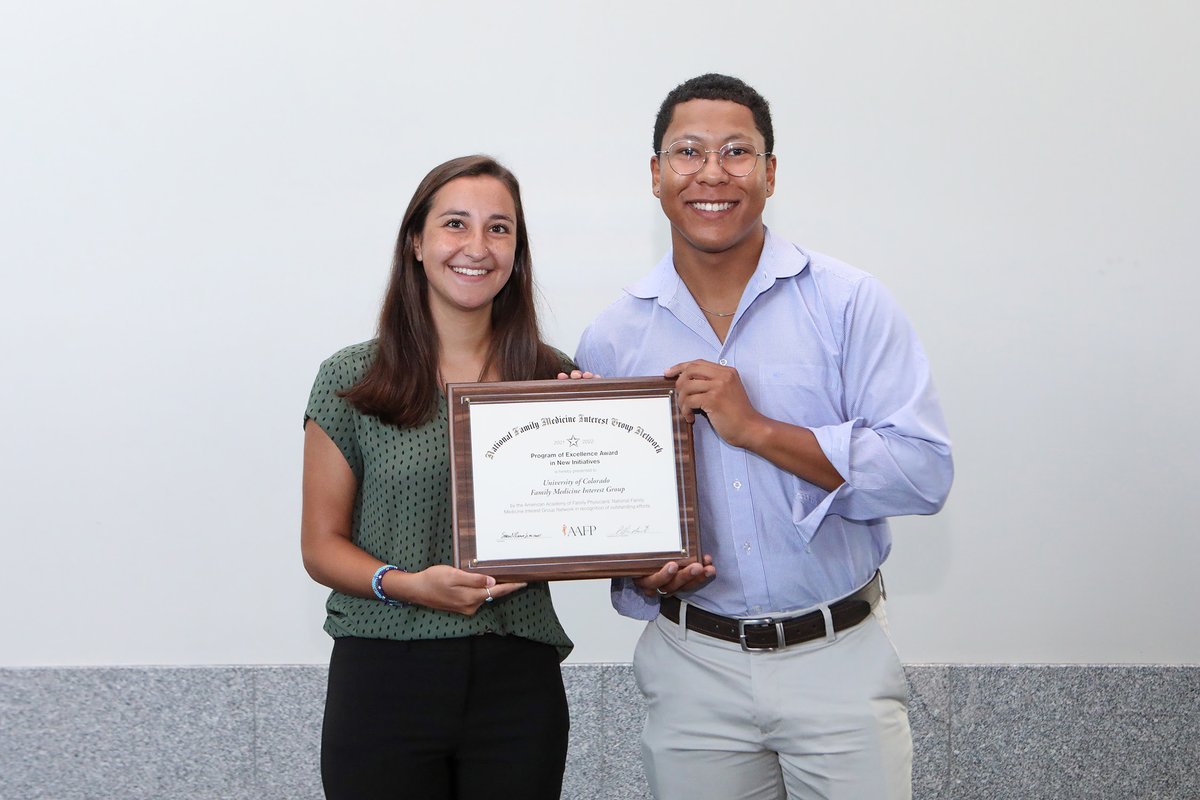 TOMORROW: at 6 p.m. MT, @aafp is hosting a virtual town hall on monkeypox that will provide the latest information on clinical recognition of the virus, vaccines and treatment options, infection control, and more so they can provide optimal patient care. buff.ly/3vQhMM2 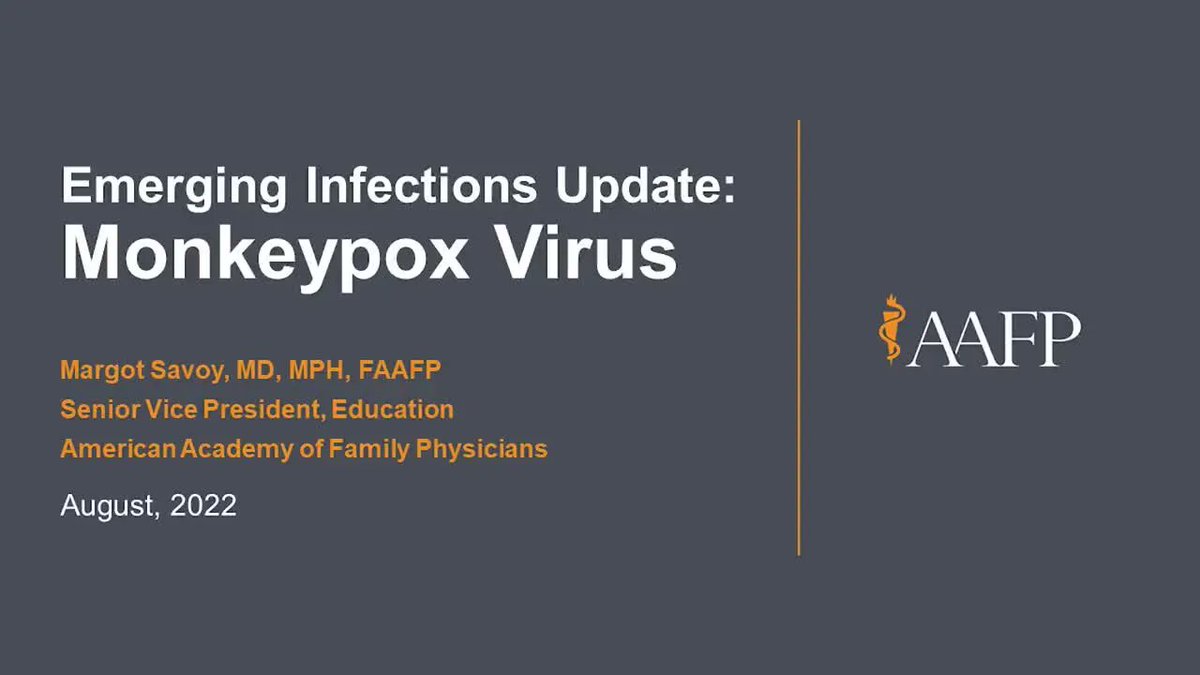 Colorado had a great time at @aafp National Conference in Kansas City. We loved meeting current medical students pursuing a career in family medicine. The future is bright! 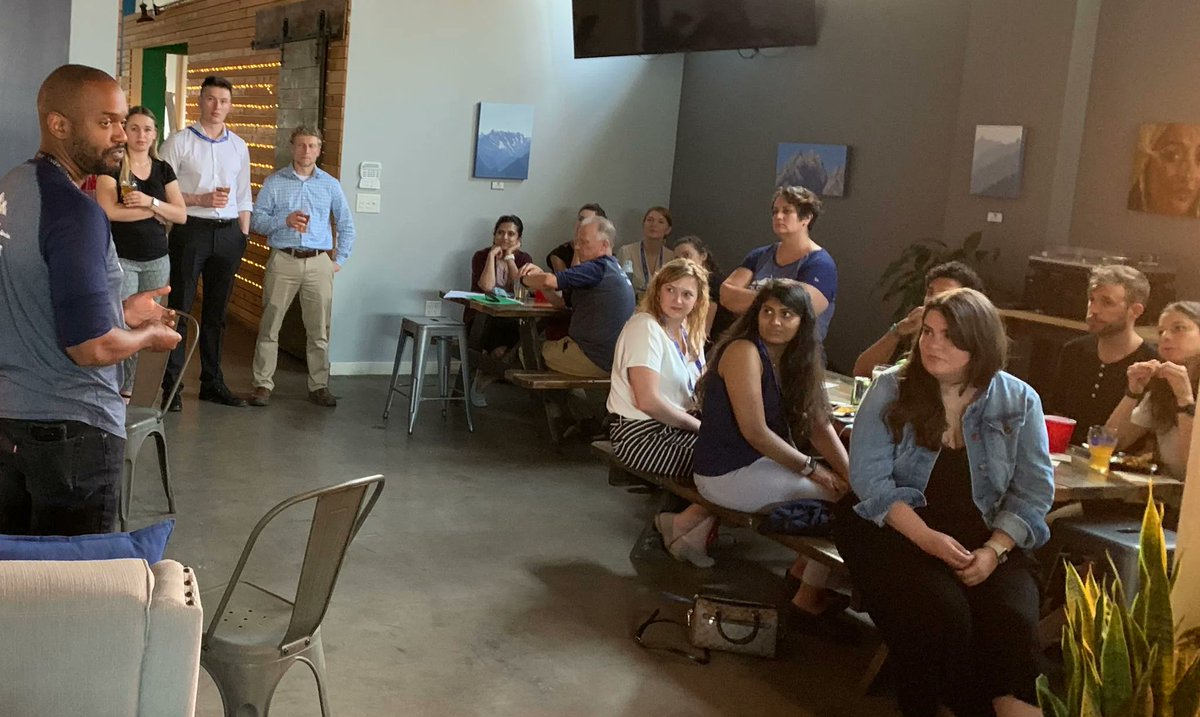 The @LungAssociation is seeking stories related to experiences with air quality through this online form. Share how lung disease, air quality or climate change have impacted your life. buff.ly/3yoCPpt 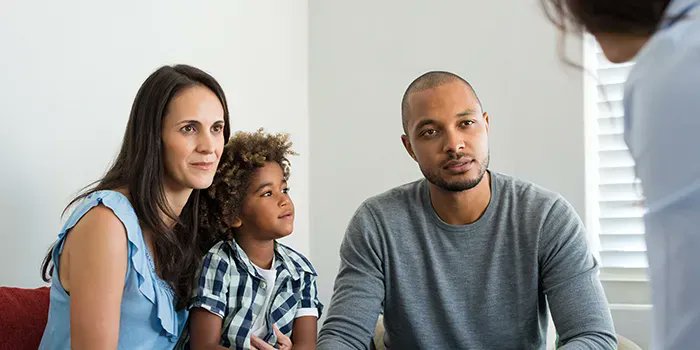 Get to know the COVID-19 Therapeutics Program virtual CME with CAFP and @CDPHE is tomorrow at 12pm! It's not too late to register buff.ly/3H75SSa 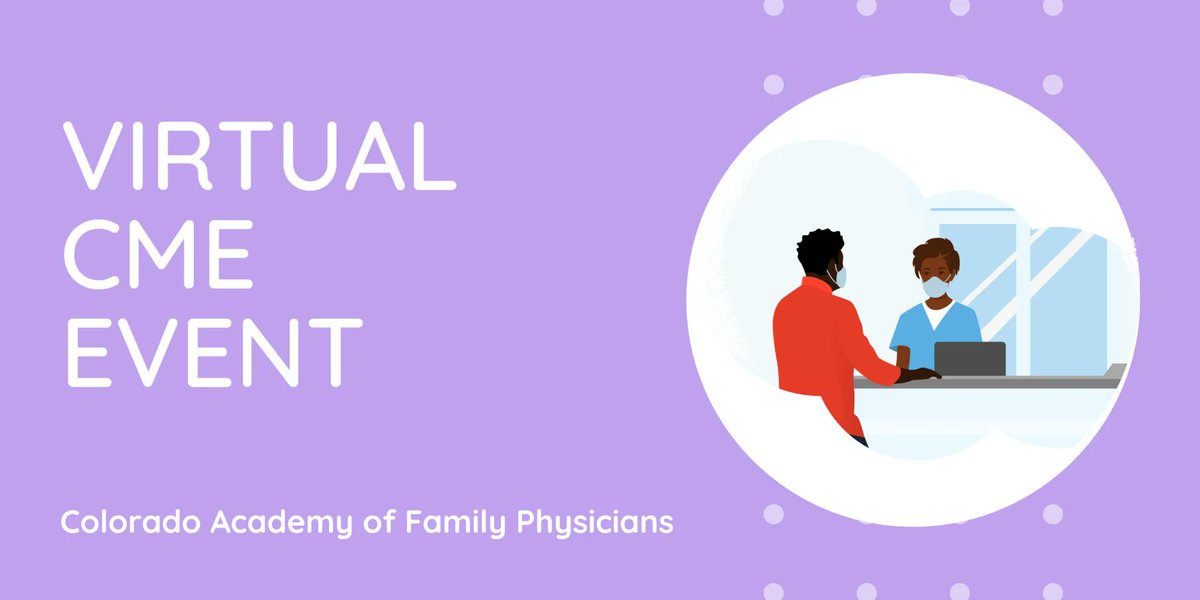 The CAFP has identified 49 candidates running for the State Legislature who are or will be champions of family medicine's values, our members, and their patients in Colorado once elected. Find more voting resources here: buff.ly/3LCITAC #coleg #copolitics pic.twitter.com/Lqoi56VeHT

Our CAFP Delegation to the @AAFP Congress of Delegates debated 39 resolutions on AAFP policy from last year's virtual Congress & dozens of 2023 resolutions - tackling a wide range of issues from administrative burden to reproductive health, to climate change, & healthcare reform. pic.twitter.com/VeSQS9HNI2